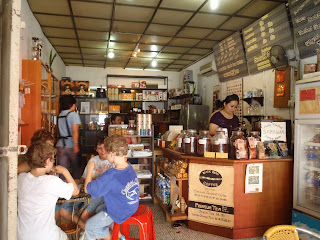 Actually, it's not at all dark so far, but we haven't reached the jungle yet.

We've been in Kuching in Sarawak for a week now. We're in another tiny marina in a very muddy river, with huge tidal range and incredible fast-flowing water. Huge trees float past (and occasionally through) the marina. We're 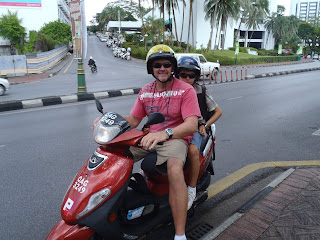 around 20 minutes from the city, which we can reach by bus, or by motorbike. Scott hired one for a week and we all take turns accompanying him. We've done an amazing amount of provisioning on the back of that bike so far and both Seth and Finn love going off with their dad to look for the usual spare parts. Red Boomer have hired bikes too so we make quite a convoy.

Kuching is a really cool town - Chinese shops, good coffee (yee haa!) and more local Sarawak crafts for sale than you could poke a stick at. Seth is particularly taken with the blow darts and is trying to persuade his dad to buy one. The people are incredibly friendly - possibly because the place isn't over-run with tourists so we are still a bit of a novelty. Locals fall over themselves to be helpful.

The crossing from Tioman was a doddle - flat seas, light winds and the added bonus of an extra crew member. Our friend Ole joined us for the 55 hour crossing and was a brilliant crew member. Overnight, Scott and I usually take alternate 3 hour shifts so after a few days we're pretty tired, but this time we were 3 hours on, 6 off - luxury! We caught a big wahu (yummy), a marlin (which we let go) and a coral cod. Plenty of fish in the freezer now, which is a very good thing. Scott and Ole played guitar and were very active on the fishing front, so all good. 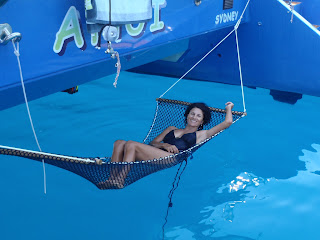 We've hardly done any school this week, what with all the stocking up and playing tourist. When we get to Kota Kinabalu, furt 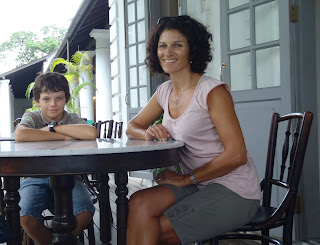 her North in Sabah, we should be able to pick up the school work for the rest of the year.

The hammock photo was taken on Mother's Day when we were still in the Tioman Islands. Scott made the hammock from spare tramoline netting to hang under the boat or under a tree - bliss.