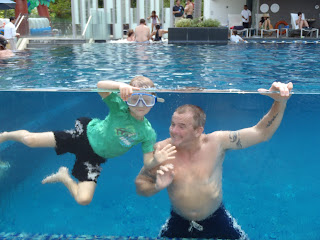 Since our last entry we've been in marina- world, both in Malaysia (Admiral Marina in Port Dickson) and in Singapore (One15 Marina on Sentosa Island). It's not possible to anchor anywhere in Singapore and so marinas are the only option. I love Singapore, with its gloss and high organisation. It's hot and sticky, of course, but whilst plugged in we can run the air conditioner and there's nothing finer than coming home after a long day of trudging the streets to a cool boat. The pool here at One 15 is also rather wonderful and there is a fully equipped gym, which I have managed to use every day. Ah the luxury!

Anyway, despite the sheen of Singapore appealing to my nature, we were here for the serious business of obtaining Visas for our onward journey. We have now secured our Visas for Indonesia and also Papua New Guinea, which is excellent news. The man at the PNG consulate was very helpful (and also rather lonely, I think, in his quiet little outpost on the 4th floor of an office block) and was able to give us our Visa six months in advance. The Indonesian Embassy was full of masses of people queuing each time we visited - there's a great deal of activity over the border between the two countries and much local labour here is Indonesian.

Scott had a lovely few days exploring the innards of my ailing washing machine, which managed to go up in smoke (not ideal on a boat) this week. He walked all over Singapore trying to find a replacement that would fit in the locker and when that failed he went on a further quest for spare parts. He then spent two days dismantling the whole thing - I think the thought of my miserable face anticipating 6 months of washing by hand was enough to spur him on. Anyway, clever man that he is, we now have the Bionic Man of washing machines awaiting my dirty laundry.

From here, we'll head up the East coast of the Malaysian peninsular and explore the Tioman Islands before cutting across the 400+ miles into darkest Borneo. I'm not sure why Borneo is reputedly so dark - any ideas anyone?

The school work is going well. We generally don't take school holidays as the boys have so many days off to do fun stuff anyway, so it's straight into Term 2 in the next couple of days. Yesterday I went against my nature and took the boys to Sentosa Island to the Luge - I generally try to avoid Designated Child Focussed Activities Including Expensive Rides but sometimes one has to do these things. They enjoyed it - I was nearly sick. Scott was still communing with the washing machine so managed to avoid it.

More soon. We can be tracked on the Yot Reps site at the following address: