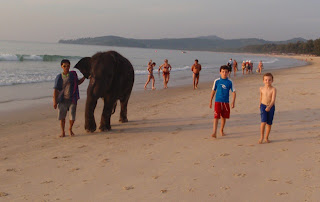 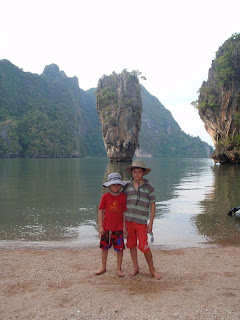 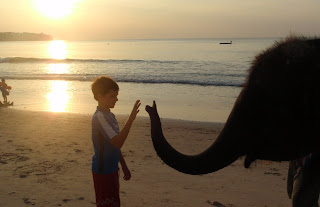 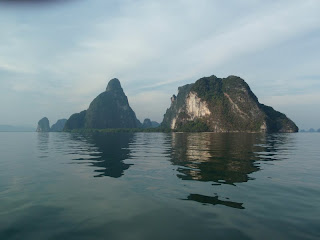 We've been largely hanging around Phuket since Christmas, anchoring off many different beaches and exploring the main island. We made it our mission to try to find spots that had no jet-skis but discovered that on the West coast that was impossible so we fled to the East in search of peace and beauty - finding it in Phang Nga Bay.

Phang Nga is the large bay to the East of Phuket that divides Phuket and Krabi. It is there that the wonderful limestone islands rise up sheer from the water, forming wonderful silhouettes against the sky. We visited James Bond Island, where The Man with Golden Gun was filmed in the '70's – a very cool little island full of caves and closed in bays. The area is famous for its 'hongs', known as 'rooms' in Thailand. These are inland caves or open lagoons enclosed by rock, usually accessed by swimming or kayaking through a narrow, dark cave. The boys love discovering them.

The beaches in the South of Krabi – Ao Nang and Railee – are packed with massage huts and long-tail boats ferrying tourists around. The tour companies do a roaring trade and there are mass groups of kayakers and snorkellers. We've been very glad to have our own floating tour company and not to have to fight through the throng. We go to the bays and hongs when all the tourists have gone home, often getting them to ourselves to enjoy.

We've seen baby elephants walking on the beach and have bought prawns for dinner from local fishermen – we've even had wind for sailing! After a couple more days of the beach we'll head back up into the Bay to discover more islands and caves in the North, where tourists tend not to go.

The boys' school work has just arrived and they have a few more days' grace before we crack the whip and start the new academic year. I'm sure there will be no moaning at all..... Finn will be starting in kindegarten and Seth is starting Year 6 – his final year of primary school. Will keep you posted as to how Finn's first day goes!

A wonderful part of this lifestyle is that new friends come from all over the world; the flip-side of that is the fact that at some point they inevitably have to head off into the blue and we don't know when we'll see each other again. Thailand is the point at which paths diverge, with many cruisers heading off towards the Mediterranean. Those taking the Red Sea route generally like to head towards Sri Lanka by the middle of January and so we have had to say goodbye to a number of lovely friends - Chay, Katie & Jamie from Esprit; Amanda, Jason, Jean-Jacques & Louis from Pegasus; Martin from Anima III and Jane, Marc, Caroline, Grant & Noah from Imagine. We have spent so much time together and have no idea when we will see each other again - too sad!