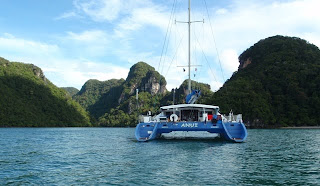 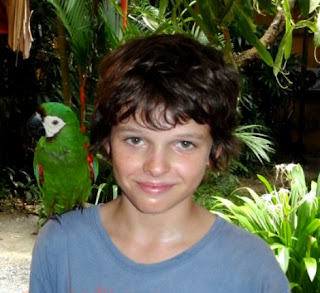 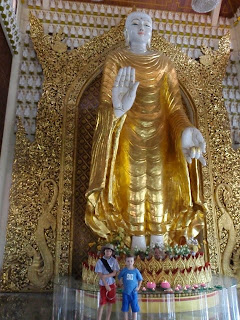 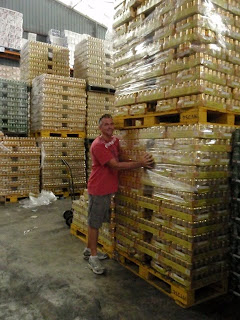 A month since our last blog. I have to confess that I've been waiting until we found something in Malaysia that would make the words flow... Probably sailing the Melaka Straits has not allowed us to see the finest sights that Malaysia has to offer. Mostly we've seen towns, concrete, dirty water and have craved quiet anchorages and somewhere to swim.

From the match-stick marina at Melaka, we visited a half-built marina at Port Klang and then motored up to Pangkor (another half-built marina!) where we stayed for a few days. Scott and the boys rode a motorbike around Pangkor Island, where I am sure that full workcover safety practices were followed.

From there we headed North to Penang. Penang's main town, Georgetown, is a fine mix of old and new, with many small Chinese shops selling everything imagineable. We bought a beautiful deep blue tea-set painted with golden dragons (clearly Scott's choice) and visited the Standing Buddha and the equally huge Reclining Buddha. Scott spent a considerable time with the chiropractor as both standing and reclining were proving difficult after months of carrying fuel cans and other unwieldy items.

After Penang we eventually arrived at the islands South of Langkawi, where there is no concrete and the steep limestone cliffs arc up from the dark bays - beautiful. We were finally able to put the kayak into the water and paddled through caves and tunnels (not much freeboard on the kayak with all 4 of us in it!). There was a freshwater lake called The Lake of the Pregnant Maiden which we swam in a few times. The lake is enclosed by high rock walls and separated from the sea by only a few meters of rock. The legend of the pregnant maiden is actually a sad little tale about an elf king and queen which may not have been known by the many couples who came to the lake each day in tourist boats looking hopeful. I managed to be mugged by a monkey whilst out for an early morning run - the cheeky thing stole the dinghy key whilst I was stretching and only returned it after a stern talking to!

So we're about to check out of Malaysia and enter into Thailand. I'm sure Malaysia has many beautiful places that we've missed and we haven't done it justice at all. The islands South of Phuket look wonderful and we're getting ready for Christmas. The duty free shopping here in Langkawi has been incredible. Cases of beer $11!! We made Scott a beer throne......... and above you can see him hugging the beer mountain at the warehouse.

More soon, from our fourth country. Before Christmas, we promise!