The many lives of Melaka 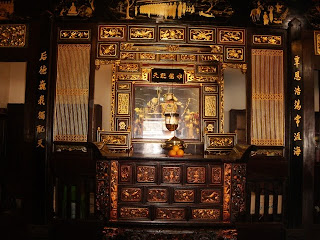 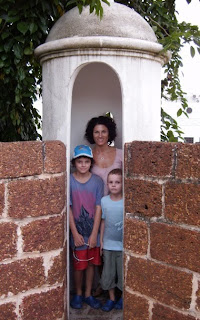 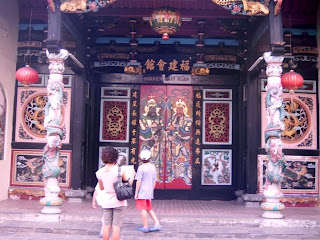 We've been in Malaysia for two weeks but haven't got very far. We spent 10 days with the other Sail Malaysia rally boats at Johor Bahru, just North of Singapore, stocking up on things and escaping the heat with our beloved air conditioner. Scott had to prise the power lead from my sticky hand when it was time to go. We headed up the Melaka straits for a couple of days. These waters are reknowned for ships and pirates. We encountered many of the former but thankfully none of the latter - apparently they only go for the big ships these days. The wind was not and is still not in our favour so we're now in Melaka waiting for a break in the Northerlies before we head (you guessed it) North to Pangkor, Penang and Langkawi.

Melaka is a fascinating town, thankfully. It has a long history, having been established as a place for trade and commerce as early as the twelfth century. Poor Malaka, part of old Malaya, has been serially colonised - everyone had a go - the Chinese, the Dutch, the Portuguese, the English. Each of these bossy countries left its mark, much to the delight of its tourists. There are ancient Portuguese forts, Dutch buildings, Chinese temples - some buildings date back to 1600. The fabled and lauded Cheng Ho, Chinese explorer by sea, is deified as a god and his statues pop up everywhere. We've had a good time sampling the local Chinese food and visiting the temples.

The rally events have been rather disappointing, so we will probably give them a miss from now on. Scott's idea of hell is being trapped on a bus tour, but the boys and I decided to do the rally tour of Melaka a few days ago. We were taken to a time-share presentation at a posh hotel, a rather sad 'traditional Malay house', in which a bravely smiling family was trying to live and a replica palace. Where did the real palace go? No doubt one of the invading bossy nations carried it off somewhere. Anyway, no more bus tours for us. We'll stick to the wonderfully tacky 'trishaws' with their sound systems and plastic flowers and the ancient 17th century church which happily accommodates buskers and hawkers and allows its visitors to climb on the tombstones. National Trust eat your heart out.

More soon, when we manage to get further North and find water clean enough to swim in.

By the way, I had two articles published this week in Australian 'Multihull World' !

Also, for those of you that didn't get this last time, you can track us by logging on to the following address :

Finn and his protector, Gebe Island A brief internet interlude in the town of Manokwari, at the top of the Cenderawasih Bay in Papua, before we are out of range again - so a quick hello to all our blog friends. Hmm, what to say about Papua? Well, it is not the kind of cruising ground that makes you want to buy a boat and head off into the blue. Coming here as a land-based tourist would probably be quite different, with the few people that come here mainly taking dive tours with everything organised for them. Coming here on our own boat brings some administrative challenges and we haven't felt comfortable to leave the boat unattended so that limits how much we are able to see. Papua certainly has a wealth of beautiful islands and the interior sounds fantastic and untouched by the Western world, but if it doesn't come with a good anchorage, we can't see it! We are still heading East and are optomistic that PNG should be far more fun than Moluku and Papua have thus far bee
Read more