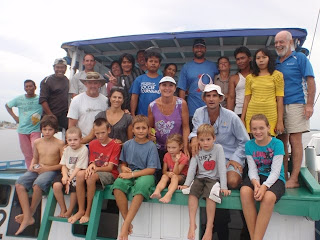 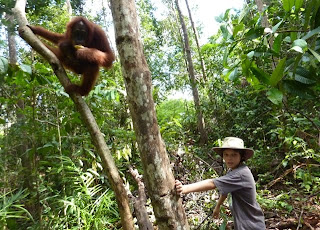 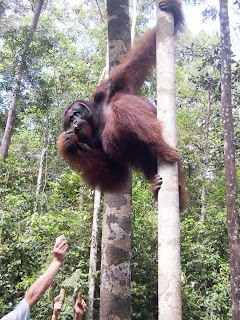 On the 8th of October 2010 me and my family went on the experience of a lifetime visiting and living among the Orangutans, the great apes of Indonesia.

We left my boat at about 9:00 am with 13 other people including Jeremy, Natalie, Indigo, Shae and Tanzi all from a boat named Suspence. Our other friends on Red Boomer 2, owned by Bill and his large merry crew of Jane and Andrew and their sons Connor and Troy. Andrew’s sister Yvette and her husband Ole and their new crew member Mark whose girlfriend we know from years back in the marina in Sydney.

We boarded the Klotok from my boat and set off for the national park known as Tanjung Puting. When us kids got onto the boat we were amazed by the space. There were 4 bunk beds and 2 single beds. There was also plenty of space for luggage. We had a look and were impressed by the amount of space. There was a decent sized kitchen and flushing toilet. The upstairs area was a plain green floor and next to it was the captains quarters and then a back area with benches and seats and a ladder down to the kitchen and bathroom.

The time that we were not on shore was playing games and making cubby out of the mattresses and blankets. The first few hours were spent playing downstairs and getting used to the boat.

We arrived and station 2 and stopped there for lunch and then continued on to station 3. When we got to station 3 we got off and went for the first walk to the orangutan feeding place where we sat and watched the orangutans. On the way there an orangutan got Connor’s bag and opened it and Connor had all of his Pokemon cards sucked on and chucked in a puddle and then started reading his comic and put his undies on its head and then when it lost interest it walked over and grabbed onto my mum’s leg. After that experience we proceeded to the feeding place.

When we got to the feeding place we found that there was a platform covered in bananas. When we got there we saw about 10 orangutans surrounding us and they were just walking among us and holding onto your hand.

We saw 3 orangutans with babies and 2 grown men, 3 kids about my age and 2 fully grown ladies. Personally I liked the babies the best.

We left to go back to the boat and then we went back to station 2 and had dinner there and stayed the night there.

In the morning we had a nice wake up from 2 orangutan kids about 6 years old and we got onto the wharf and managed to get it to come closer and fed both of them and Finn fed the first orangutans and I managed to feed 1 of the orangutans 4 bananas and the other orangutan I fed it 3. After that we had a really nice breakfast of banana pancakes and pineapple and then went onshore for station 2.

We got to the end of the track and saw the king of the orangutans hanging from a branch above us with cheeks like plates, he was massive.

I fed 3 different orangutans and fed them 7 bananas each. When all the orangutans left we started to head back to the boat. We headed off and then on the way to station 1 we had lunch and watched for orangutans. When we got to station 1 it was raining so we could not go onshore at station 1 which was a shame so we set off again back home.

Even though we didn’t go to station 1 it was by far the best experience for all of us!

Great blog Seth. We are currently in Belitung on the last leg of our Indonesian voyage. In just over a week we'll be in Batam, on the Indo side of Singapore and after that will enter Malaysia and have a week or two at a marina there to wash everything on the boat and enjoy the delights of air con for a little while. Did I mention that it's hot??

This unspoilt end of the archipelago is so friendly and welcoming - every time we land on the beach there are 100 people waiting to take photos and shake our hands. I think Scott is getting the idea that he is a rock star. Ah well, must be the news of the sarong has spread.