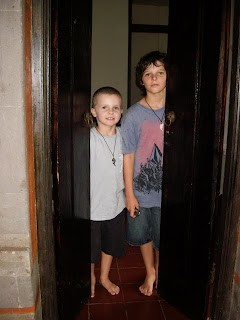 We were in for a week but have now escaped t the much cleaner Nusa Lembongan. Good to be back in clear water! In Bali, we moored in the smelly, windy but convenient Serangan on the South of the island. We did the obligatory trip to Kuta and were surrounded by traders the second we got out of the cab. Scott hasn't been to for more than 20 years and recognised virtually nothing. The laneways are still there, crowded with shops and dangerously over-run with motorbikes. Shopping is fun, if you're into serious hard-core bargaining. We didn't really need anything but picked up some clothes and then headed to the beach, where Scott and Seth both had massages. I had a foot massage and bought handfuls of cheap bracelets whilst I was a captive in the massage chair. Scott started chatting to a wood carver named Made who was carrying , and trying to sell the huge head of laughing Buddha. Somehow their discussion about the mahogany and the time to carve it turned into bidding, with Scott carrying the beautiful Buddha away for a seventh of the asking price. It turned out that Made was keen to sell as he had a cock-fight to go to that night and wanted to have money to burn.

Cock-fighting is a very popular male passtime here, with it being taken very seriously and the source of large numbers of rupiah changing hands. We were looking into having some laundry done a few days ago and the man of the house took us into his yard and showed us his roosters that are almost ready to fight. They were stunning birds – huge, glossy, muscular. It seemed a shame to think of what they might look like if they came off worst on the night.

We had a couple of days off the boat exploring Ubud, a beautiful town and centre for Balinese arts, set up in the hills an hour North. We hired a driver with our friends Jane, Andrew and their two boys and headed off. We easily found accommodation with a couple of tiled rooms in a lush garden just off the main street. The boys loved the outdoor shower and the pool and we had lots of breaks on the verandah in between outings. The market was fantastic – colourful, vibrant and noisy, with silks, sarongs, wooden carvings, silver jewellery all piled up. We were very restrained. We walked through the and Scott was the brave volunteer who had a monkey sitting on his head.

We were lucky enough to be in Ubud during a festival celebrating literacy and education, so there was a great deal of activity in the streets and particularly around the many temples. Women carried elaborate golden baskets of fruit and flowers on their heads and men carried large platters of rice and other offerings. Our driver took us home the slow way, through rice fields terraced on the hills and to the magnificent Gunung Kawi temple. It was pouring with rain, but we descended the hundreds of steps into the valley, where the temple is cut into the hills. There were young men praying and leaving their offerings of fruit, flowers and incense, all dressed in white.