Showing posts from August, 2010
Show all

August 31, 2010
We've arrived in Labuan Bajo, on the Western tip of Flores, the start of Komodo country. We've almost run out of vegetables again and so need to head to the markets to re-stock. There are rumours of watermelons and mangoes... When I last wrote, we were in Wangi Wangi for Indonesian Independence Day. That didn't work out so well for the rally, with a small amount of 'social unrest' resulting in the celebrations being cancelled and the rally visitors being escorted back to their dinghies by armed guard! We had decided not to go, luckily. Nobody is quite sure what the protest was about but it appears to have had something to do with the local government having decided to host the event during Ramadam and before sunset – the local Muslim population were upset at food being served to Westerners and possibly also at government cash being spent on our entertainment rather than health and educational services for the local area. A fair point, really. Anyway, it le
1 comment
Read more 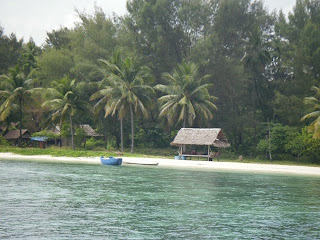 12 August 2010 We left Banda for Ambon – quite a different place! It rained and poured and then it rained some more. The dinghy filled up several times. We sent our washing off to be done and it came back – wet – three days later. Ambon is a large city of some 300,000 people. The town is large and smelly, with pockets of modern urban buildings next to traditional crowded markets, with tiny one-chair barbers' shops squeezed next to stalls piled with local fruit. We travelled around by 'bemo' (small mini-buses that appear to have a particular route but are also happy to divert from it). At one point our bemo decided to take a detour through the market, with barely an inch either side. Everyone in Indonesia smokes – or at least everyone male! - and that includes in the buses, in restaurants, in shops. Indonesian cigarettes have a particular smell, of cloves and something else, so not unbearable but overwhelming in the back of a bemo in the rain. The ri
Post a Comment
Read more
More posts