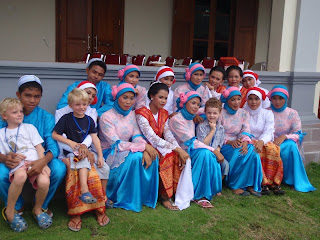 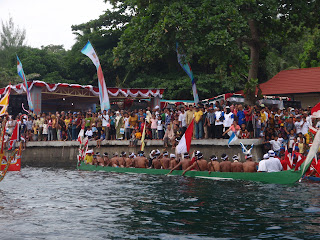 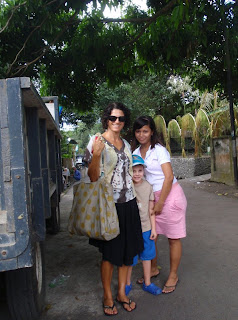 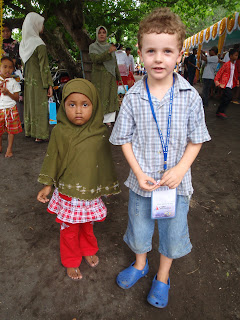 Have you ever stepped into a place and feel like you have landed on another planet? - a planet far more colourful and friendlier than the one you left? Arriving in Banda Naira has been like that for us the past few days. A magical, beautiful island dominated by the Gunung Api volcano.

Our passage from Darwin took 3 days and nights, with us arriving in Banda early in the morning of 27 July. We were escorted in by the harbourmaster and showed where to anchor. Then followed a few hours of paperwork, with various officials boarding the boat – immigration, quarantine, customs and the harbourmaster who all brought their entourage and folders of forms. Everything was well-organised and courteous. The men in uniforms all cuddled the boys and took photos of them; a couple of them accepted coffee and were all smiles even when we said we had no whiskey or cigarettes for them.

The town of Naira is delightful – much more to tell than in this brief blog. The people are so friendly and welcoming – we have to stop every few metres to have photos taken, to say our few polite words of Indonesian and have people practice their English. The Indonesian government has spent millions getting ready for the Sail Banda event and everyone is so happy to have visitors that will spend some rupiah and find their island beautiful.

Today the welcoming ceremony for all the yachts (there are so far 20 here) took place, with Scott being one of the nine chosen Captains who were invited to represent the foreign visitors. There were traditional dances and speeches from the Minister of Marine Affairs and the Governor of Maluku. Scott shook a thousand hands and the boys were cuddled and had their cheeks pinched many times. The ceremony was followed by a huge feast – delicious – and the final of the kora-kora (long boat) races. We had to come back to the boat for some down time, but will go back for more this evening. We have to arrange some diving for the next day for Scott with his new mates from the secret police (who don't appear to be very secret) and to meet our smiley guide, whose wife is doing our washing! There is a fort from 1602, built by the pillaging Portuguese and a volcano to climb. We are meant to move on from here in two days' time but it is very tempting to stay....

Scott wants to write his own blog entry – no doubt gloating over his Captain status. He is getting a little above himself.