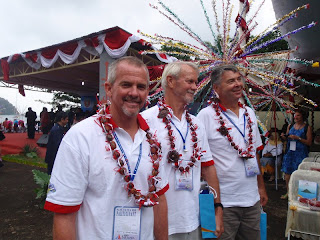 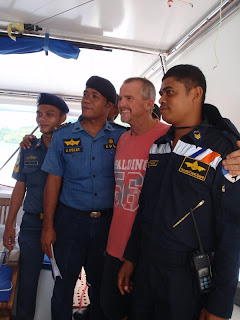 At last, to finally be given the position in society I so richly deserve.

After an interesting 3 day voyage from Darwin to Banda which involved a perfect reach out of Darwin in 15 knots with kite up passing everything in sight including all but 2 of the Darwin to Ambon yacht race entrants we settled in beside Convergence, a 22m cat rigged mono owned by Randy the owner of Westmarine, the biggest chandlery in the USA. If I was to turn to the dark side and go back to monos this would be the boat.

We sailed due north up the side of the Tiwi islands for around 95 miles then out into the Arafura Sea. Around midnight which is always a great time for the wind to build to 30 /35 knots and the swell to increase to 3 to 4 m with a 2m sea on top and on the beam . We had 3 reefs in the main and about 5 square metres of headsail out and were struggling to keep the speed below 10 kn. Waves were coming over the top and straight through the cockpit so the only option was to drop the main and sail under a tiny bit of h/sail which brought us down to 5 knots - a bit slow but much more comfortable.

After about 30 hrs we entered the Banda Sea and the swell started to abate. Unfortunately a lot of the boats we passed the day before passed us during the night so it was time to stick up some sail and get going. During the day as the conditions improved we increased sail until we were with full main and h/sail , wind on the beam and power reaching between 9 and 13 knots.

Just when things are going right the shit hits the fan again. The reacher halyard jammed in the sheave block at the top of the mast and would neither go up nor down so I had to climb the mast and physically remove the block to enable us to drop the reacher on the deck.

A full day and night of perfect conditions and by 07.30 the impressive site of the volcano Gunungapi came into view. Quite a contrast from the red dirt and flat scrub of Arnhem Land and Darwin to high volcanic peaks and jungle-covered islands.

Entering Banda Harbour was an amazing site. Possibly one of the most beautiful natural harbours in the world . We were expecting a quiet entrance but the town had pulled out all stops with large Kora Kora canoes (20mtr with 30 paddlers all calling out and racing up and down the harbour, but wait there's more. After clearing in with customs, Quarantine, Immigration, Harbour Master were next(which involved 6 boats coming out to Anui with a variety of very impressively uniformed officers who all, by the way, addressed me as Captain with much hand shaking and official nodding.) I was most impressed with what seemed to be my new high position in society. From there we went to shore to visit the town.

After 3 days at sea with about 6 hrs sleep it was like being in a James Bond movie. Exotic locations and people and we were the celebrities. Everywhere we went people wanted photos taken with us and all referred to me as Captain Sir!.

The next day we were instructed that THE NINE CAPTAINS a name given to the Skippers of the first nine boats to arrive (I was Captain Sir number 7) were to be picked up by the harbour masters vessel at 08.00 to be taken in to be welcomed formally to Banda .Women and children were instructed to go in separately as this was very important official business. By this time I'm starting to think there needs to be some adjustments to the hierarchy in the Armstrong residence to bring it more in line with the Indonesian system. The boat arrives with much more hand shaking,saluting and by now everyone's calling everyone Captain. The nine agree we will no longer answer to anything other than our formal title especially at home. As the boat nears the dock things got a bit more bizarre.

There were literally a thousand people on the dock including several high ranked government officials,Minister for the region, King of Banda, all of the village chiefs and more security than a Barack Obama visit to Afghanistan .The band played as we were paraded around to shake hands and have photos with just about everyone. We were ushered on stage to be presented with gifts and entertained by dancers from groups all over Indonesia. We were then taken in a procession down the road which was lined with the whole of the Banda population in traditional dress or uniform to a feast with the dignitaries and chiefs. All closely followed by about 50 paparazzi. It was an amazing day & I have never met such friendly people. It has now been declared that I will be addressed as Captain and a band will break out to announce my entering or exiting the room. I'm also considering getting my own Admiral uniform with epaulettes and several shiny gold badges.

As a side note, a man came up to me at the presentation and introduced himself as Raymond. He was following the Head Minister around closely so I asked him what his job was to which he readily replied 'I am Secret Police, here to guard the Minister.' Guess the secret's out. During the presentation I asked him if he’d seen Sarah and the kids who had been mobbed by locals and paparazzi due to the fact they thought Finn was the most interesting thing they had seen in years. In 1 minute he returned with a position report and continued to do so every 10 minutes for the rest of the day.

All hail the Captain