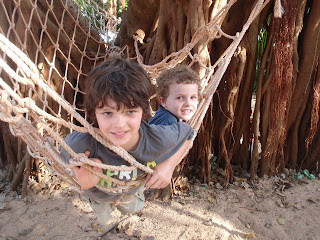 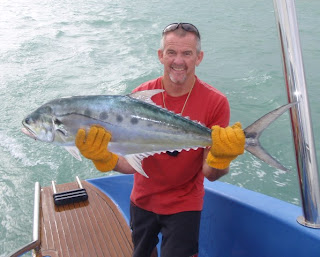 Have spent the last few days in Gove/ Nhulunbuy at the North East tip of Arnhem land, after crossing the Gulf. The crossing was lumpy but otherwise fine – it took us around 38 hours. The boys were wonderful and took it all in their stride – good preparation for the longer journeys to come.

Scott was rather upset at me showing his sad little fish so here is is with his manhood restored!

Gove/ Nhulunbuy is place like nowhere we have ever been before. We're anchored not far from the bauxite refinery and are very glad that the wind is blowing the right way; all the boats in the anchorage are covered in red dust, which is a permanent fixture up here. The Gove Yacht Club provides some basic (read, very) services but the town is a distance away. Yesterday the Armstrong family had their first experience of hitch-hiking!

The town is a bleak, unsettling mix of cashed-up miners and desolate-looking local Yolngu people; the two groups pass each other like ghosts with no acknowledgement. The local Yolngu lived their traditional lifestyle until the missionaries arrived a hundred years ago; their lifestyle was even more deeply affected when the Government agreed to the mining companies setting up here in the 60's without thinking to ask the Yolngu and their land and sacred sites were bulldozed. The Yolngu maintain their language (English can be their third or tenth language) and many aspects of their traditional life. When the mines moved in, many Yolngu people moved from the missions to set up basic homes on their own land on the Gove pensinsular and reclaim it for themselves. Who can blame them.

The yacht club has the most amazing tree for kids to climb and play in. The boys climbed it for hours whilst we had a quiet beer as the sun went down.

Walking and running in Gove has been rather tricky. The road runs between scrubby bush and the beach. Not only are there crocodiles, but three people warned me about wild buffalos and the dangers of 'startling them' – would me running along the road startle a buffalo? I had no idea; my run was short.

From here we head to the Wessel Islands and then across to Darwin – our next blog will be from there. It's been so lovely to see so many friends follow the site – Seth is so happy that his friends have 'joined' and is going to send them messages of their own tomorrow before we leave.