Crocodiles in the wild North 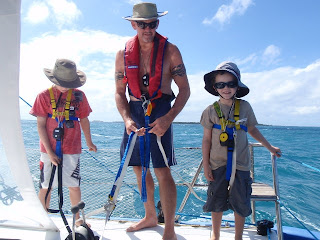 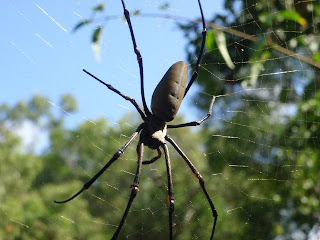 We are a couple of days away from Cape York and have been having all sorts of adventures. The sailing has been great – mostly flat and always fast . We're tending to find ourselves with the same international boats at most anchorages, all of whom are travelling to Darwin to join the same rally as us. Two French, two US and two Norwegian boats – all lovely people.We (read, Scott) caught a tuna so we're living well.

Finn got sick and we had to get him seen by a doctor. This involved a radio relay through a very nice man on a barge, who called the clinic at the Aboriginal community of Lockhart River. The lovely nurse came to collect us in a 4WD and two hours later (after blood tests from the Flying Doctor) took us back to a landing place up a small river, with strict instructions not to get out of the car until the dinghy arrived, due to the very large croc that she had seen there whilst fishing the day before.

We're currently anchored at a pretty little place called Portland Roads which has a cafe (!) and nothing else. The lunch was delicious and the other 2 tables of guests were fascinating – two older men, brothers, with magnificent long white beards, who live on an island accessed by a sand spit at low tide; two couples travelling in their own small planes, taking a diversion from the local air strip; a man alone in a 4WD and two mud-spattered young guys cycling from Cairns to Cape York. They all seemed to know each other from the various camps along the way. Whilst we were all sitting there we looked down at the water and saw a croc sitting next to our dinghy. We decided to wait a while.

The picture is of another delightful creature we met whilst out for a walk. That one is especially for my sister, who loves spiders.

By the way, you can now follow us by going to the following link: